Mount Nebo is located on a hill overlooking the Holy Land and is believed to be the burial place of Moses. The custodians of the monastery are Franciscan monks most notable of whom is Father Piccirillo, an archaeologist who has written many books on the history and archaeology of the Holy Land. It contains some of the most impressive mosaics in the world.

Mount Nebo can be found atop a cliﬀ that oﬀers panoramic views of the area including the Dead Sea, the West Bank, the Jordan River, and, on occasion Bethlehem and Jerusalem. Venture inside the monastery and take in the mosaic works, including the main mosaic which measures 3 by 9 meters and captures diﬀerent aspects of monastic life. Once outside the monastery, be sure to admire the large serpentine cross, a ﬁgure which represents the serpent taken by Moses.

Recognized as a holy place linked to the life of Moses already in the 4th century AD, the site was equipped with monastery and churches to accommodate the pilgrims that were flocking in the area since then. Abandoned in the 16 century, it remained uninhabited until the Franciscan monks purchased and renovated it in the 90s. The most notable Franciscan monk is Father Piccirillo, an archaeologist who has written many books on the history and archaeology of the Holy Land and who provided great contributions to the excavations. Pope John Paul II visited the site during the Jubilee Pilgrimage in the Holy Land in the year 2000 and planted an olive tree that is still growing today beside the Byzantine Chapel for Peace.

The Book of Love among People

At the entrance of the site, there is an inspiring memorial monument “The Book of Love among People” by the Italian sculptor Vincenzo Bianchi. The monument celebrates the close spiritual union between the Jewish Torah, the Muslim Koran, and the Christian Gospel. On the base of the statue are carved the names of the persons and institutions who carried out the construction of the site, and the phrase “God is love” transcribed in Greek, Arabic, and Latin.

Erected on top of Mount Nebo around the foundations of the old 4th-century byzantine church, Moses Memorial Church is the greatest highlight of Mount Nebo. It contains basilicas, baptisteries and impressive mosaics dating back to the byzantine area.

In the central nave, on the right of the altar, the visitors can admire the Memorial of Moses, a black mosaic cross that indicates the alleged place of burial of the prophet. The carpets that adorn the part in front of the main altar hide trapdoors and wells, probably used as secret passages. The halls of the baptistery contain the famous mosaic depicting astonishing hunting and pastoralism scenes full of details.

Outside the monastery, near the balcony overlooking the panorama, there is a bronze sculpture by the Florentine artist Gian Paolo Fantoni, representing a snake twisting around a stick, forming a stylized cross. It symbolizes the serpent that Moses raised in the desert and the crucifixion of Christ.

Mount Nebo is the place where God showed Moses the Promised Land for the first time.

“Then Moses climbed Mount Nebo from the plains of Moab to the top of Pisgah, across from Jericho. There the Lord showed him the whole land—from Gilead to Dan,2 all of Naphtali, the territory of Ephraim and Manasseh, all the land of Judah as far as the Mediterranean Sea,3 the Negev and the whole region from the Valley of Jericho, the City of Palms, as far as Zoar.4 Then the Lord said to him, “This is the land I promised on oath to Abraham, Isaac and Jacob when I said, ‘I will give it to your descendants.’ I have let you see it with your eyes, but you will not cross over into it.” Old Testament – Deuteronomy 34

The best place to admire the breathtaking scenery described in ancient religious texts is the terrace outside the Basilica. In clear days, it is possible to see up to Israel and the Dead Sea. 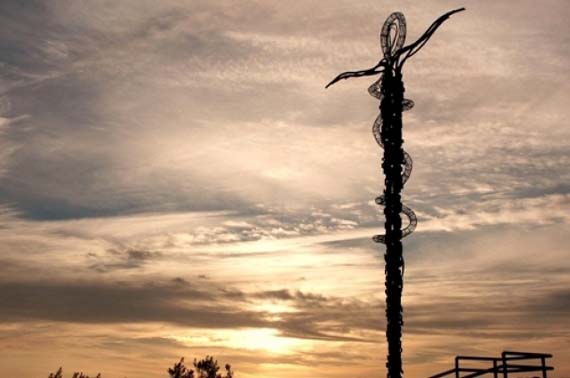