A Focus on Amman 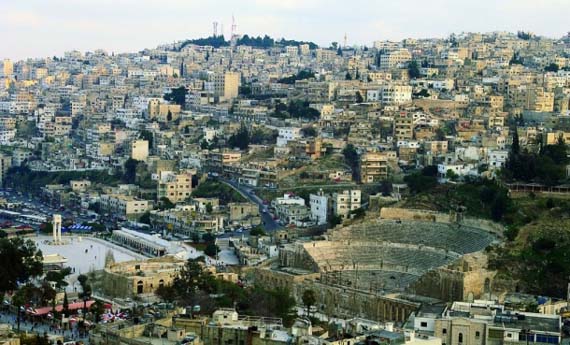 Almost half Jordan’s population is concentrated in Amman; Jordan’s capital. Amman as we see it now is the civilized capital of the Hashemite kingdom, it has evolved a lot from the late 19th century when Emir Abdulla Ibn Al-Hussein established it and since then it has become a modern capital holding the rich tourism sector, as well as educational, economic, health …sectors; all commercial, cultural and political activities are centralized in Amman. It is home for all interests.

Transportation in Jordan is not a concern; Queen Alia International Airport is about 30 minutes away from south Amman. Bus and taxi means are also available to ease your touristic stay at Amman. As for its weather, you can take benefit of its 4 seasons, summer temperatures vary between 28 and 35 degrees Celsius, winter time is not a tough time, some rain and it rarely snows. Spring and Autumn are truly agreeable.

The Seven Hills of Amman

It is very well known for its seven hills that are burst with stone colored houses of plane roofs. Its hills get a remarkable admiration by the tourists. It is called the White City after its luminous white houses that date to many past ages. It is simply a combination of the old world and the new world. It may be considered one of the oldest cities on earth. Many civilizations have lived in Jordan, we mention some of them: Ammonites, Babylonians, Nabateans, Romans, Circassains knowing that these civilizations left a great impact on its populations’ way of living to prosper and become what it is nowadays. Its old buildings has been renovated with the same architectural methods, to keep the same historical attractions that magnetize the tourists and force them to spend a memorable stay in Amman and enjoy its sites joyfully with the company of its people’s hospitality.

You can’t drive in Amman without stopping by and strolling in its ancient streets that is vibrant with life and with the sounds of the crowded people in its cafes savoring its special sweets and traditional cuisine. And definitely, you can’t miss its souvenirs shops that are spread everywhere. Nonetheless, to truly explore Amman’s beauty, your visit should bump into the great museums of the city and its civilized sites that are mainly not far away, you can easily reach them in the downtown quarter. An important religious and military site that dates back to Roman and Byzantine times is the Citadel Hill of Amman. You can clearly notice remains of the Islamic era. There is a great building known as Al-Qaser, a palace, with a huge gate and audience hall with chambers. And somewhere near, you can spot a small Basilica of byzantine times, a church that dates back to the 6th century. The Temple of Hercules, known as Great Temple of Amman, also lies on the Citadel Hill, it has been reconstructed and resembles the Temple of Artemis. Moving to the great Jordan Archeological Museum that dwells a collection of antiques, exhibits of Dead Sea Scrolls and roman stones of Hellenistic prodigy and jewelry. And a small Folklore Museum that houses some of Jordan’s cultural features like pieces of embroidery, mosaic, crafts and traditional costumes. The historical Roman Amphitheatre was built in the 2nd century and seats 6000 people, it is still used for sport and cultural occasions. Many mosques are spread in Amman, Jordan’s capital. King Abdullah I Mosque, Abu Darweesh Mosque , King Hussein Mosque are all amazingly designed mosques with startling architecture that dates to ancient times to keep track of Jordan’s history and identity.

You will definitely enjoy your stay in Amman, a mixture of ancient and modern life that guide you to explore the treasures of such a wonderful ancient city.