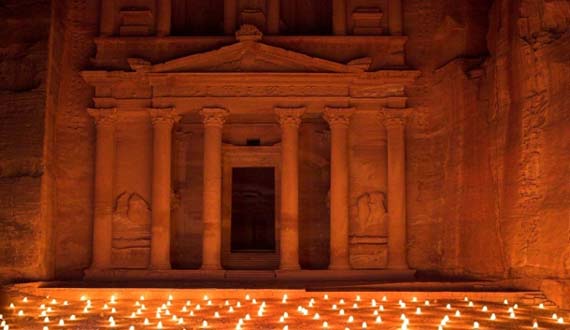 Petra was lost for hundreds of years and rediscovered in 1812. The site was designated as a UNESCO World Heritage Site in 1985 when it was described as “one of the most precious cultural properties of man’s cultural heritage.” The temples and caves of Petra with its huge white rocks forming the gate and the narrow entrance which towers over 21m high rest up on the slope of Mount Hor. Moreover, tours to Petra Jordan have been the main source of income for the kingdom, and have really taken off since 1994.

Want to book with a reputable Petra tours operator? You can now travel to Petra from Egypt, Israel, Tel Aviv, Jerusalem or Amman. Take a look at our customised tours.

When you take a tour to Petra, Jordan, you’ll note that it is possible to reach Petra on horseback, where you pass through the main gate called Bab Asiq. At the end of the Siq, Petra’s most marvelous gravestone, the Treasury, appears it is the Pharaoh’s treasure. The rock caves were still recently inhabited by Bedouins. Most of this unique city was built by the Nabatean Arabs in the fifth and sixth centuries BC. The Romans carved out a huge theater. Its true value lies in its ancient civilization; Petra had a population of over 30000 inhabitants. It is all craved in its rocky nature; the Nabataeans carved their temples and tombs into the pale yellow to dark brown rock. A variety of hotels offer accommodation for a memorable visit. On July 7, 2007, Petra was named one of New Open World Corporation’s New Seven Wonders of the World. So no matter how much we describe Petra and its supremacy, a true visit will show its worthiness to the naked eye and thus you’ll believe it’s a miraculous place with astonishing history that will last forever in your mind. Want to book with a great Petra tours operator? Finally, you can travel to Petra from Egypt, Eilat, Israel,Tel Aviv, Jerusalem, Amman.