Madaba is situated on the king’s highway, at a distance of 40 Km south of Amman. It is famed for its mosaics dating from the Byzantine era, many of which are located in private homes, discovered when owners dug the foundations. The map of the holy land at St. George’s church dates from the 6th century AD and is the most preserved of its kind in the world, its clarity and precision helped archaeologists discover many other important sites in Jordan and the West Bank. Also found in this marvelous town is the Church of the Apostles.

Another monument worth visiting is the Church of the Beheading of John the Baptist, the early-20th-century Roman Catholic Church that has enchanted pilgrims and visitors from across the globe. At the heart of the structure is the Acropolis Museum where a well dating 3,000 years back is still fully functional. The structure, complete with its Roman columns, is still in remarkable shape.

Arguably one of the most treasured mosaic creations in the area can be found in the Church of the Apostles. The mosaic is dedicated to the 12 Apostles and is the only place where the name of the craftsman is included. Created in AD 568m, the art boasts an array of colors and whimsical pictures of animals, flowers, birds, and fruits.

Madaba is known for its delightfully vibrant and lush produce. Visitors are urged to sample olive oil, which is freshly pressed in the area. The food scene is one of the liveliest in the city. A visit to Al Mandi for a plate of barbecued chicken topped with nuts and dried fruit is not to be missed. Winter meals are best spent in Haret Jdoudna, where popular Mediterranean dishes can be enjoyed opposite a roaring fireplace. Whichever restaurant you choose, do ask for sajieh, a lamb or chicken based dish that is cooked on an open flame and served with thin bread.

The Madaba’s downtown market area is a souvenir shopper’s dream. From handmade trinkets to elegantly designed home accessories, the shopping experience is truly remarkable. The city is best known for its handmade carpets and tapestries, which are often produced on site for potential customers to see. Watching carpet makers working their fingers through the weaving machine has a hypnotizing effect and it is not uncommon for onlookers to spend a couple of hours admiring the process while sipping mint tea.

1-          St George’s Church & Mosaic Map: In this site you will see the masterpiece of Madaba (a Byzantine mosaic map of the Holy Land that goes back to the 6th century, showing Jerusalem and other cities)

2-          Madaba Archaeological Park I & Virgin Mary Church: This archaeological park includes the fantastic mosaics of the church of the virgin which was built in the 6th-century, Also the remains of several Byzantine churches. 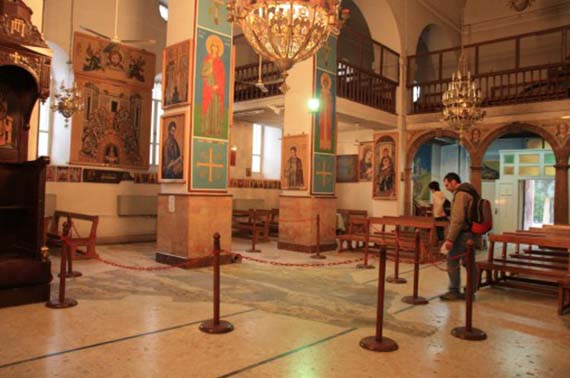