A Rose-Red City Half As Old As Time

John William Burgon (1813-1888) was a British clergyman who later became the Dean of Chichester Cathedral.

Like Percey Shelley in Ozymandias, Burgon was very taken by the beauty of a place despite never actually casting an eye upon it. Burgon entered the Newdigate Prize competition three times and won on his third time in 1845. Other winners of the prize include Oliver Wilde and John Buchan of ‘The Thirty-Nine Steps’. 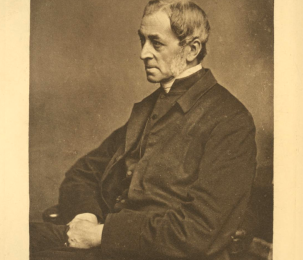 The theme that year was the up and coming destination of Petra, famed for its hugely rewarding destination- albeit after an immensely tricky journey. Petra had been gaining popularity after the more adventurous western tourists who had undertaken the journey wrote about their treks after arriving home.

Buron did actually visit Petra in 1862, seventeen years later as a guest of Miss Elizabeth Frances Webb. The group of seven set off from England on 10 September 1861. After a cruise down the Nile and sightseeing in Suez and Mt. Sinai, the group reached Aqaba on 5 April. Their trip to Jordan involved a taxing, month-long camel trek.

Burgon spent four days in Petra over the Easter weekend 16-21 April. He made sketches of Petra; sadly, it is unknown if these survived. He commented in a letter that Petra was ‘the most astonishing and interesting place I ever visited, and may well stand alone.’ The sandstone cliffs … in colour unrivalled’ but goes on to say: ‘… there is nothing rosy in Petra, by any means’.

After departing from Petra, Burgon’s group traversed through Wadi Araba to Hebron before reaching Jerusalem on 29 April 1862. Their journey by camel had totalled 50 days. Upon arrival, Burgon fell ill and as a result missed the rest of the trip to eastern Jordan. He was carried by mules and then lifted onto a boat that took him to Beirut. Deathly ill, he spent more than a month recovering before catching a steamer to Marseilles, France in June and arriving home in July 1862.

He is buried in Oxford along with many notable others including Kenneth Graeme of The Wind in the Willows fame.

The last couplet of Petra has become one of the most famous in poetry, and the poem is 370 lines in its entirety.

An excerpt of Petra, a Poem:

It seems no work of Man’s creative hand,
by labour wrought as wavering fancy planned;
But from the rock as if by magic grown,
eternal, silent, beautiful, alone!
Not virgin-white like that old Doric shrine,
where erst Athena held her rites divine;
Not saintly-grey, like many a minster fane,
that crowns the hill and consecrates the plain;
But rose-red as if the blush of dawn,
that first beheld them were not yet withdrawn;
The hues of youth upon a brow of woe,
which Man deemed old two thousand years ago,
Match me such marvel save in Eastern clime,
a rose-red city half as old as time.